Home/Allgemein/Let’s Talk About Ethics – Part I: Saints
Previous Next

„For a newspaper story you took a trip with all expenses paid by the story subject. Do you tell your readers about the payment?“ That’s a question most journalists (especially freelancers) have been confronted with. It is also one of the questions posed by Peter Vermij, a Dutch science journalist turned PR consultant, in a recent online survey on journalism ethics. More than a quarter of the journalists who responded said they would not tell their readers. On top of that a few percent said they would not even tell their editors.  (You can see some of Peter’s data here. I’ll post a link to the finalized results when they are published.)

So is that bad? Should they tell their readers? Should they not take such trips at all? Is the line between PR and journalism blurring? At the 8th World Conference of Science Journalists in Helsinki late last month, Peter organized a House of Commons-style debate to argue about this and similar questions. It was titled „Wearing many hats? How to preserve independence“ and he asked me to give an opening statement arguing strongly that the two spheres of PR and journalism need to be kept apart. My charming US colleague Anne Sasso agreed to play the whore to my saint and argue for pragmatism. 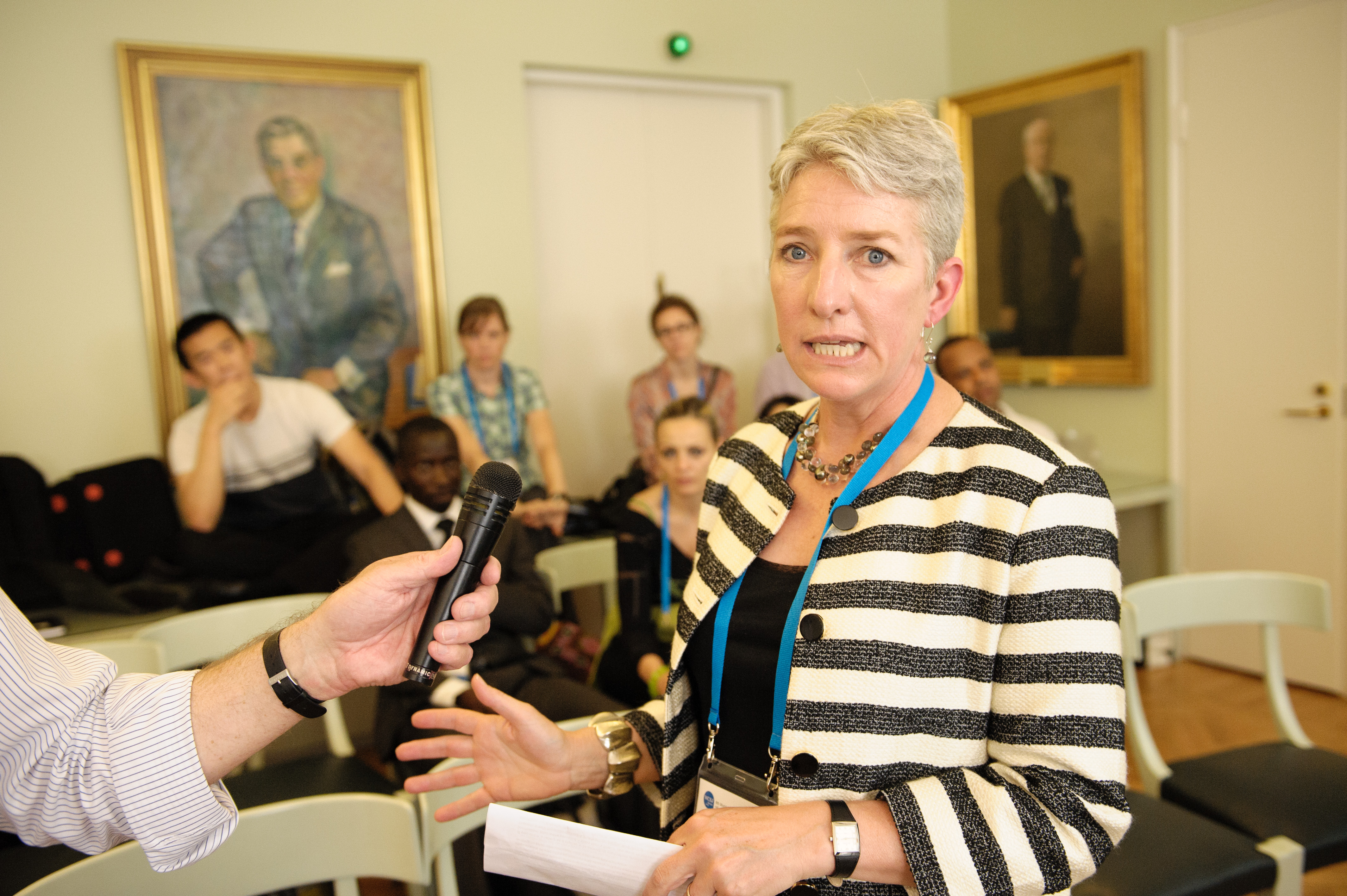 „Now, if someone could give me a hundred bucks and tell me what to say.“

Anne has written, that she felt worried about being cast as someone „willing to write for anyone with the money and inclination to pay me“. (Sorry for the caption :)) I’m happy to report, I felt just as miscast as the „saint“. After all, in the roughly five years I have been in science journalism I have crossed some of the lines I was supposed to be defending. (For instance I have written articles for PR magazines and I have been on paid trips to destinations in Europe and Africa. I will delve deeper into that in my next post.)

There were really three reasons I decided to take this on anyway. Firstly, no-one else wanted to do it. I asked a few German colleagues, older and wiser than me and they declined (partly, because they felt taking a strong position on this would be hypocritical and partly, because they are older and wiser than me). The second reason was that I felt preparing a short speech would give me a good reason to take a few days to think about ethical issues that play an important role in my everyday worklife but that I rarely take the time to think about for more than a couple of hours. And yes, a free trip to Helsinki and meeting/hearing some awesome colleagues like Helen Branswell, Deborah Blum and  Maryn McKenna also figured in the decision. (I can feel the saintly glow dimming already. It will get worse, I promise)

So after some thinking, this, more or less, is what I came up with:

Let’s be honest. This is about money. If every science journalist out there was making 150 000 Euros a year writing for the New Yorker, the Guardian or „Der Spiegel“, we wouldn’t be sitting here having this discussion but shouting from the rooftops how journalism is different from PR and you should NEVER EVER EVER mix the two. If newspapers were just waiting to send us to the ends of the earth to seek out those science stories, we wouldn’t even be thinking about taking that all expenses paid trip to a research facility in the south of Spain.

So, let’s be honest. This is about money. And people aren’t making 150 000 Euros a year. Newspapers aren’t paying those research trips. And writers are mixing PR and journalism.

I think that is a really bad idea. In fact, it ranks right up there with making everything we write available online for free for a decade and then wondering why our business model is failing. The obvious reason that writing for say a daily newspaper and a glossy PR magazine is bad on an individual level, is that there are bound to be conflicts of interest – real and perceived. Some writers are better at keeping these things separate and some are worse. Some are more concerned with adhering to some moral standard of their own devising, others really don’t care. But readers and editors won’t know, where on that spectrum any one of us is, and anyway, mostly we are making things up as we go along. When I talk to people straddling that line, I also get the feeling that we are deceiving ourselves. Is it really possible to be a watchdog half the time and a cheerleader the other half? We talk about wearing two hats, but there is only one head underneath – and that’s where the thinking usually goes on.

But that isn’t even my main point.

This is NOT about scrutinizing every single decision taken by individual journalists. (Most of us have compromised at some point in some way.) What really concerns me is that collectively the field of freelance science journalism as a whole is moving towards the field of science PR and vice-versa. If there used to be a line that line is blurring. If there used to be a fence, that fence has gone.

Why is that bad? For one, it weakens our position as journalists. We’re making it very easy for editors and publishers. Why pay for research trips and good reporting, if someone else is picking up the tab. And as the money put into independent science journalism dwindles, the influence of those with an agenda inescapably increases.

But it’s not just our relationship with bosses and publishers we have to think about, it’s also our relationship to our readers. There is a whole range of high quality science information out there, from blogging biologists to NASA videos. What makes science journalism journalism is that we are a third party. We may never be objective, but objectivity is the ideal we strive for. So perception matters. Do people see us as science journalists or as mercenaries with a pen skillfully crafting prose for whoever is willing to pay? I think that makes a difference.

It also makes a difference to society. Believe it or not, as journalists serving the public we still get certain privileges in many countries: That may range from laws protecting our sources, to tax breaks or privileged access to information. There is little reason for society to afford privileges to PR people paid by Monsanto or the Max Planck Society.

What makes matters worse, is that all of this is an orphan problem. Who is supposed to tackle it? Publishers who are busy opening up lucrative corporate publishing ventures? Editors who need to fill their pages and have a hard time finding someone who does not do PR work on the side?

So we need clear rules. There will always be borderline decisions, but the point of having clear rules is that they delineate a border in the first place. And, honestly, if we do not have clear rules what do we teach young, aspiring journalists, like, ahmmm… me? „Follow your heart“? „May the force be with you“?

One of the most annoying things to young journalists like me, is listening to older colleagues complain about how bad things have become for our profession, how newspapers are failing, journalism is dying, the internet is swallowing everything and so on… Some of this pessimism also bleeds into discussions about the relationship between PR and journalism. Yes, journalism needs to adapt. It needs to invent, create. But maybe instead of complaining about things crumbling around us we should talk about the foundations that we need to preserve and how to build upon them. Because if we sacrifice what journalism means, independent truth-seeking in the public’s interest, well, what are we actually saving?

In Helsinki both Anne and I deliberately left out parts of our speeches that tried to suggest a way forward, to come up with rules. Peter wanted us to disagree, not to meet somewhere in the middle. He wanted the debate wide open for the session and I think it proved to be the right decision. After the opening statements, Peter presented some ethical dilemmas and people in the room were asked to go to one side of the room if they answered yes and the other side if they answered no. It was a great tool, because it meant that everybody in the session was taking a stance and could be called upon to justify it. It made for a lively, fun hour, but I also came away from it with a strong feeling that the lines were indeed blurring, or as someone pointed out, the lines might be clear, but people are jumping back and forth over those lines more and more. Journalists, then, are becoming blurry.

So that’s the problem and the clear „saintly“ position on it is easy: If someone calls himself a journalist, he should not be doing work for press officers or PR magazines on the side, he should not be writing for charities or companies or taking all-expenses-paid trips.

In reality, of course, saints are few and far in between. But I’ll leave the confusions and confessions for the next blog post. For the moment, I’d like the last remants of that saintly glow to linger… 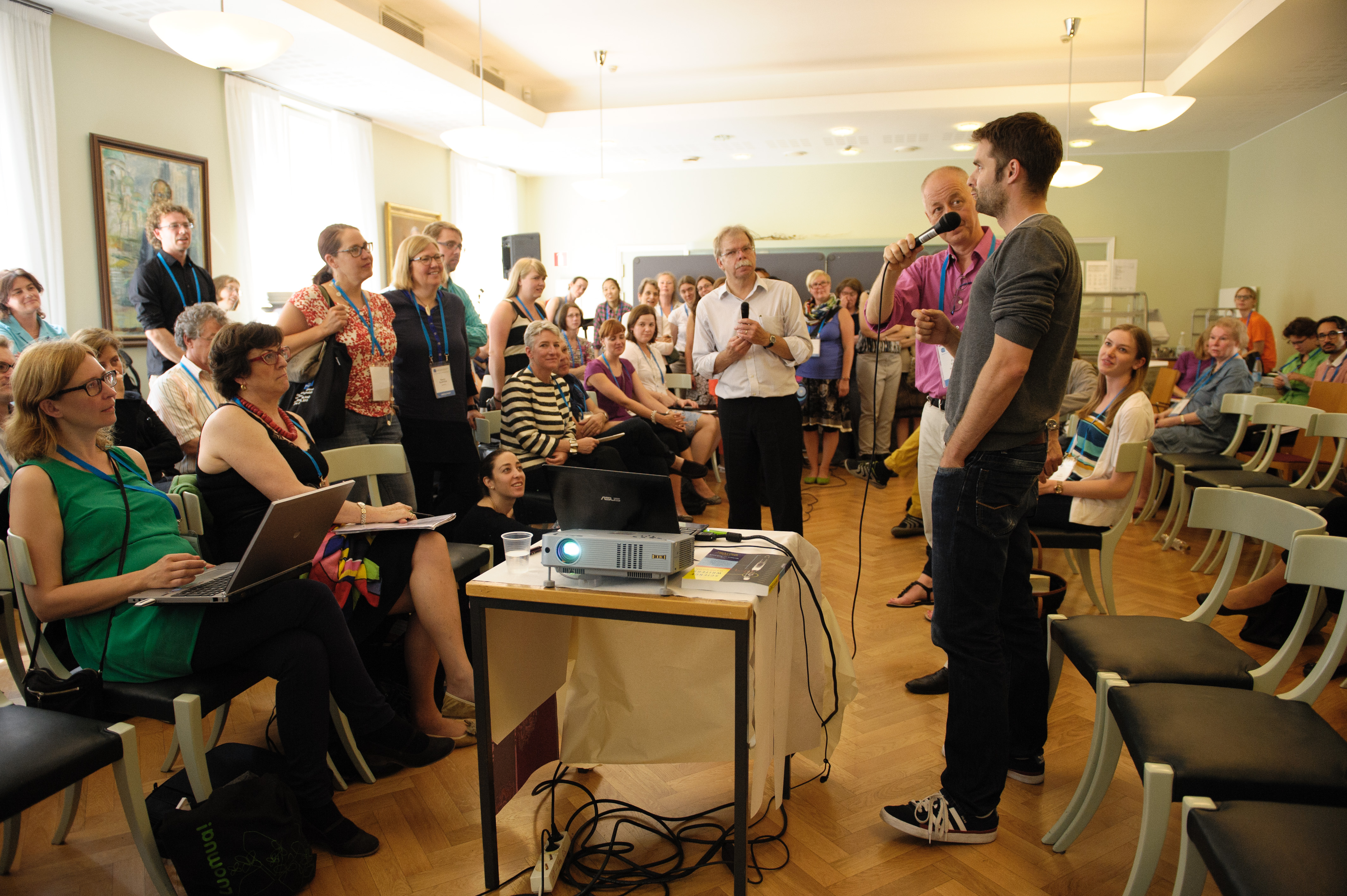 „Now how come every time I go to one side of the room y’all switch to the other?!“